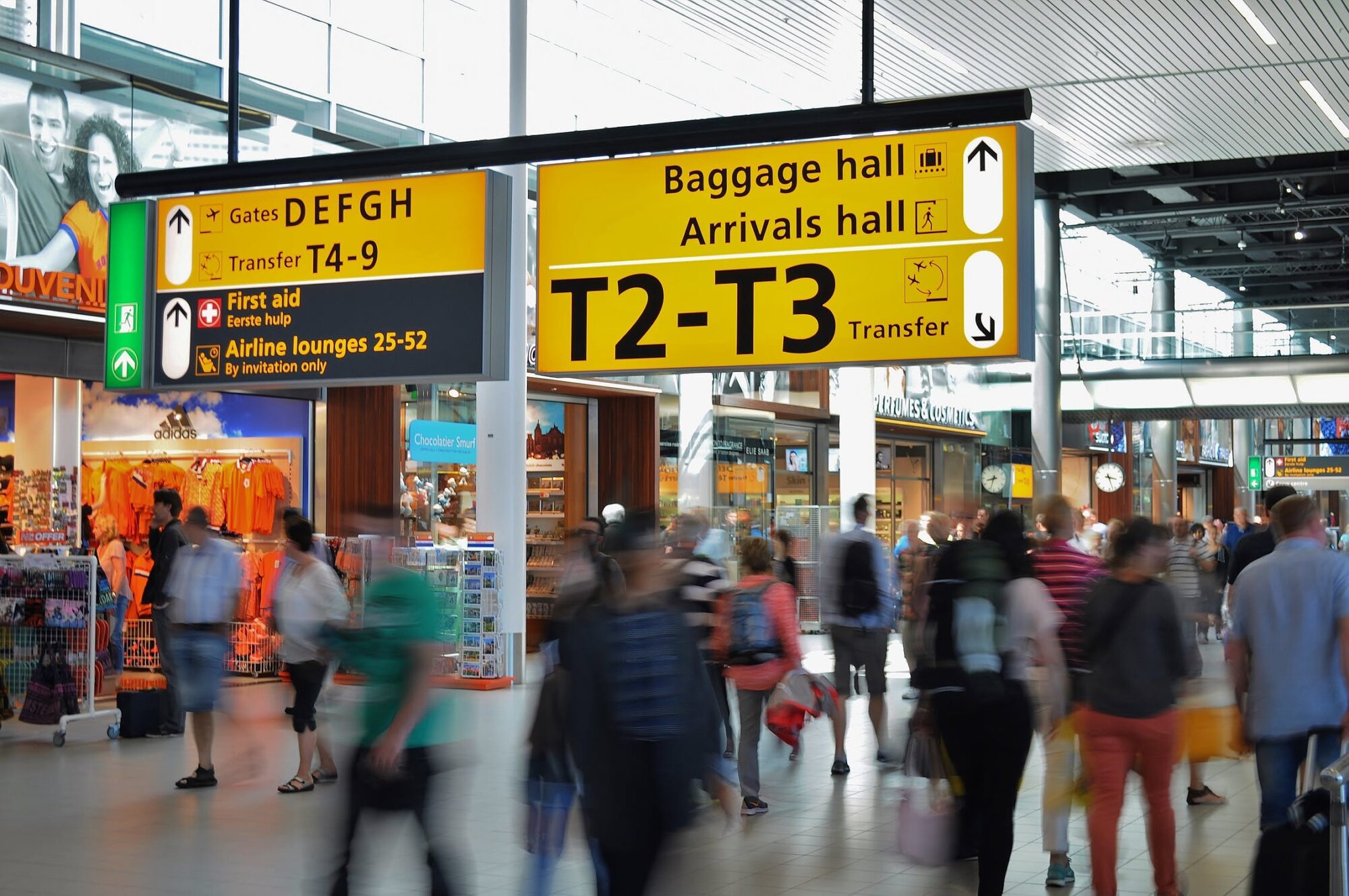 Everything You Need to Know About Airport Signage

As a functional and architectural space, there is nowhere quite like an airport – representing a unique mix of internationality, legal and safety concerns, assorted commercial considerations and hundreds of other factors both great and small. Within this environment, signage plays an integral and varied role, influencing both how the airport operates and the experience people have while moving through it.

As anyone who’s faced long delays or had to sprint for a flight already knows, airports can be places of high emotion. Stress, frustration, boredom and anger can all bubble to the surface during an airport visit, where everything from navigating the bureaucratic process of going abroad to trying to find where the toilets are can become points of contention. Increased security measures over the last twenty years have further complicated the picture, and airports are keen to ensure that despite these challenges they still provide a good customer experience.

Airport signage is an extremely important aspect of building a good rapport with travelers, and has the potential to make an otherwise stressful and confusing experience a far more pleasant and intuitive one. In fact, airport signage is one of the main factors that comes into play when members of the general public rate their overall experience at an airport.

But while wayfinding (and specifically wayfinding that is internationally recognisable) is perhaps the biggest challenge in airport signage, it is far from the only consideration. Signage in airports serve a variety of purposes, including branding, flight information, paid advertising and even public art, and these purposes are continually evolving.

Serving a diverse range of travelers over a complicated customer journey in a very large space, airports represent a thorny challenge to signage providers. Heathrow, for example, facilitates 475,624 flight departures a year through 84 airlines to 203 destinations, with 213,000 passengers landing or departing every single day. The logistical headache of seamlessly moving all these people through check-in, security, recreation areas and more is one that requires an extremely comprehensive design solution.

Some of the key considerations in airport wayfinding are:

As people who speak a vast array of languages are likely to use one particular airport (and many of them in a rush), it’s important in airport wayfinding signage to keep text to a minimum in favour of directional symbols and easy-to-understand icons. It can also be necessary to create signs in dual or multiple languages, which can offer a challenge when brevity is also vital to the effectiveness of airport signage.

Getting this right is key, as signs that are hard to interpret or poorly considered can cause untold frustration in passengers and ultimately impact their overall experience.

Crucial information must be made as legible as possible for the widest possible audience. Airport signage therefore uses highly contrasting colours, clear typefaces and comfortable type sizes to improve readability – particularly for anyone who may struggle to see clearly. This also makes the signage eye-catching and bold, so people notice it as they travel through the airport.

A lack of consistency can be very disorientating to anyone not immediately familiar with an airport. One way airports achieve consistency is by colour coding certain information. Even if many people aren’t consciously aware that, for example, yellow signs direct them to departures while green leads them away, this compartmentalisation ultimately makes the signage easier to understand.

Determining the best location for signage is an art in itself, as poorly placed signage will fail to perform its intended function no matter how well it is designed. Signs have to be placed both where travellers need and expect them, and where they have to be in order to create the ideal flow of foot traffic through the airport space.

The Best Materials for Airport Signage

The requirements that airport signage has to fulfill are so diverse that a combination of materials are often used as part of the wider signage landscape – from hard-wearing vitreous enamel to illuminated signs. In fact, large airports are probably one of the few places you are likely to find examples of pretty much every material and form used by the signage industry under one roof.

As every airport has its own unique architecture, climate and conditions to take into account, there is no paint-by-numbers approach to signage types and materials that fits across the board. Each airport therefore chooses its signage materials based on careful analysis of the facility, and often requires the right blend of static and dynamic (or digital) options.

Some of the main considerations concerning signage materials include:

When discussing materials not only should the airport’s wayfinding signage be a consideration, but so too should the wider picture of the shops and restaurants that are housed there. Airports house some of the world’s most iconic brands and restaurant names, all requiring their exacting brand requirements to be met.

As with most travel hubs that are internal and have high passenger footfall there is a strong requirement for fire rated products to be used, even more so when considering the security requirements of airports. When considering the design and implementation of signage, materials should be chosen where possible to have either 0 Fire rating or be housed to achieve such a rating.

The fire requirements of materials are taken from the Building Regulations.

Material robustness and longevity should also be considered for signage that will be directly interacting with the public. As an example, on directional map panels passengers will often press their finger against the sign to pinpoint their location and then trace their route. When tens of thousands of people are doing this, it is vital to ensure that the material will not degrade.

Another example could be the use of floor graphics, either for promotional events that are happening within the airport at shops or restaurants, or as a temporary wayfinding solution should any works that are being undertaken to the terminal disrupt the standard flow of passengers. This material will need to not only be fire compliant but also resilient enough to take the footfall of a busy passenger hub.

In many ways, the way we as travellers experience an airport is as a timeless through-place – one that is neither here nor there, full of strangers, and existing in a curious reality where 6am means much the same thing as 10pm. And with their vast, lofty spaces and long corridors, there is also something reminiscent of a museum within many airports. Through the installation of artistic elements, airports have begun to take advantage of this unique atmosphere and enhance otherwise “dead” areas within their buildings, adding value to the visitor experience with pleasing graphics and cultural assets.

There is a strong rationale behind using airports as artistic spaces, with large-format signage and cladding increasingly utilised for functions that go beyond the purely practical. Whether travellers are feeling anxious, stressed or bored, art can act as a comfort and distraction, helping people unwind and take themselves out of the moment.

It can also allow travelers to learn more about the country and community they have journeyed to, giving local and national artists the opportunity to act as cultural ambassadors and pique people’s interest in the museums and galleries that wait outside the airport’s doors. Collaborations between airports and local cultural hotspots also provide the expertise airports may be lacking in creating an effective installation, while also providing funds and more visitors for the institutions involved.

Art installations in airports can also, in a roundabout way, complement wayfinding and make the space more easily navigable. Including artistic signage ensures certain key areas stick in people’s memories, and can be helpful to passengers – even if it’s just by being able to point something out as a family group and say “if you lose us, stand by that mural”.

The Evolution of Signage & Wayfinding in Airports

It is hard to imagine now, but once broadly recognised terminology such as “baggage claim” and “boarding area” had yet to be coined, and commonly used airport iconography had not been designed. The lack of a common visual language across airports and differing sign systems (influenced primarily by airline companies, rather than the airports themselves) led to confusion amongst travellers, and thoughts turned to the importance of customer experience in these settings.

The Amsterdam Schiphol Airport had, in 1967, employed interior architect Kho Liang le and graphic designer Benno Wissing to build on existing work and pioneer the first “passenger-first” signage system. In this system, nonessential information was done away with and important information classified into types by colour. Widely regarded as one of the best designed airports in the world, this signage system became known as the ‘Schiphol Standard’.

As time went on, airports faced new challenges, and responding to poor customer satisfaction ratings, the Port Authority of New York and New Jersey called on Dutch designer Paul Mijksenaar to help organize a cacophony of inconsistent airport signs in many languages, colors, types, sizes, and conditions. New York was (and still is) home to three of the busiest airports in the world, and sorely needed better design to ease the airport experience for its passengers.

Paul Mijksenaar collaborated with the Port Authority to update the Schiphol Standard, adding features such as new pictograms, a new font (called Frutiger) and other refinements, eventually putting together a ratified set of standards for aviation signage and wayfinding. While not set in stone, these guidelines have helped to provide airports and their stakeholders with a general rulebook on best practices, which has helped to unify wayfinding signage across the globe.

Even if the initial design is perfect, however, signage solutions in airports still need to reflect changing customer needs and technological development. In this sense, signage systems in airports are a dynamic and changing entity, and what works in one airport may not necessarily fit neatly into another.

To take a recent example, split-flap boards (which were an iconic feature of many transport hubs, complete with a distinctive clacking sound) are being widely replaced by digital displays as technology moves on – although not without a share of regret. As we move into the future and both airports and customer expectations continue to change, signage is sure to follow suit.

Airport signage has, over its history, represented a design and engineering challenge that has taken decades to refine. Serving multiple functions in a unique space, good airport signage is a testament to the commitment of facilities managers, architects, graphic designers and sign manufacturers to create the best product possible, and improve the airport experience for every traveller.

If you would like to discuss airport signage solutions with our experts, don’t hesitate to get in touch.