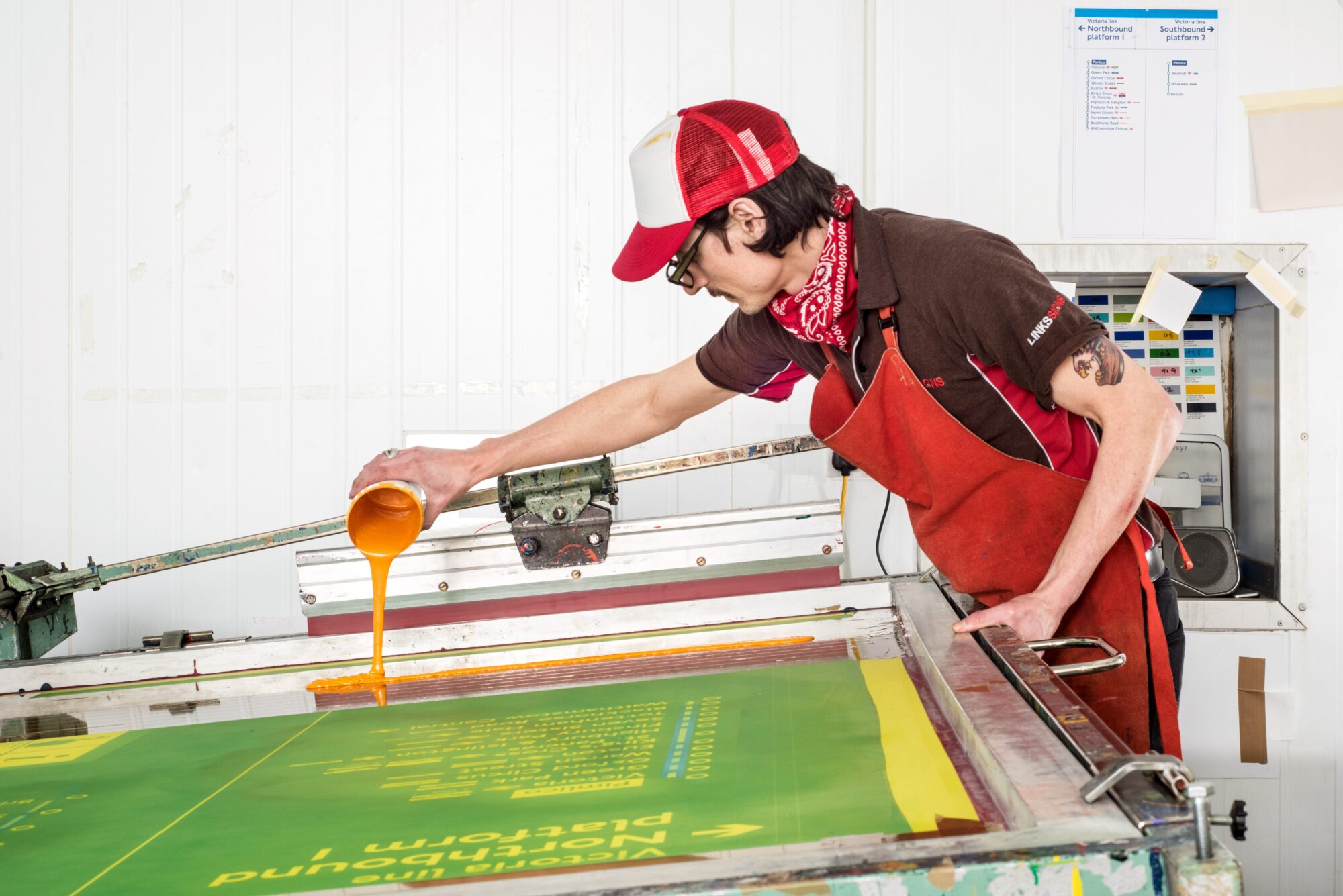 The Lost Art of Screen Printing & Its Use in Vitreous Enamel

All of us, at one point or another, will have seen a piece of art or graphic design which has been screen printed – whether it’s Andy Warhol’s Marilyn Monroe or a gig poster tacked up at a student bar. But while anyone who has passed through an art education will be dimly familiar with the technique, true mastership is the realm of a selection of passionate craftspeople – working daily at a process that is rarely witnessed outside of the sphere of graphic design.

Both remarkably versatile and strikingly effective, screen printing offers print and sign makers the chance to experiment freely while having confidence in their ability to land upon a compelling result. This allows designers to use this ancient technique in very modern applications, and while screen printing is perhaps most well known for transferring ink to fabric or paper, it can also be used in the creation of vitreous enamel.

The history of screen printing

Screen printing is thought to have developed, over the course of centuries, from traditional stenciling techniques. One theory posits that the earliest example of stencil printing comes from Polynesia, where shapes were carved into banana leaves and ink washed over them to create a specially printed cloth called tapa. Screen printing itself, however, originated in the Song Dynasty in China over 2,000 years ago.

The craftspeople pioneering this technique achieved remarkable creativity of expression and finesse, which inspired others to adopt and adapt the process. Some years later, screen printing was expanded upon by the Japanese, who used woven silk and established the process of ‘silk screen printing’. Through fabrics displayed at World Fairs, artists and designers in the West become fascinated by the elaborately printed textiles from Japan, and later further adapted the process by experimenting with different inks and chemicals.

Screen printing may most often be thought of as a quirky way to print posters and clothing, or associated with the sixties era in modern art, but what isn’t widely known is its role today in industrial sign making. By applying traditional screen printing techniques to vitreous enamel panels, this process produces signs that have far more durability than cloth or fabric alternatives, and a markedly professional finish.

Vitreous enamel is a glass-based coating which becomes bound to a metal substrate through exposure to extremely high temperatures, which ‘vitrifies’ the glass. This technique is also an ancient one, being used for around three millennia to make jewelry and decorative pieces, before becoming utilised more recently in everything from bathtubs to range cookers.

The material is considered particularly suitable for signmaking because vitreous enamel is extremely hard-wearing, graffiti resistant and aesthetically pleasing. However, it may be hard to imagine how you could achieve anything in vitreous enamel using screen printing – how is it possible to render glass into anything that resembles ink, let alone pass it through a fabric screen?

Fortunately, craftspeople don’t need to deal with melted liquid glass in order to screen print. Instead, an ink-like substance is created by grinding coloured glass and combining it with ceramic materials to create what is known as a ‘slip’. By using modern screens made from polymer meshes (rather than the traditional silk), craftspeople can then use their experience and creativity to produce graphics in much the same way a screen printer using ink would.

This skill does take time to master, however. The basics of screen printing can be picked up quite quickly, (an accessibility which explains its popularity in art classes) but it is widely accepted that it takes at least six months of practice to proficiently create screen printed enamel. Unlike screen printing using ink, the process also involves other steps and considerations which need an expert eye to oversee.

Firstly, the metal substrate needs to be cut into the required size and shape, and then sprayed with the initial coat of enamel, which has to be applied by a skilled operator in order to achieve the desired thickness. This then undergoes its first firing to around 800°C, and another white coat is applied to ensure that the top layer looks as bright and glossy as possible.

From this point, the coloured glass and ceramic slip can be applied at a traditional screen printing bench, using stencils that have been designed and produced for the purpose. However, unlike ink printing, there are some complicating factors inherent to the process of firing glass, and a craftsperson will need to determine:

Perhaps their biggest challenge (and the one which dictates the choices they make in producing screen printed enamel) is that different colours have to be fired at slightly different temperatures to achieve the best result. Through refinement and trial and error, the majority can now fire at 755°C, but others such as red, pink, orange and grey need a hotter furnace in order to become as vibrant as possible.

The appeal for professionals working with vitreous enamel in screen printing is that they can achieve fantastic results over a large run of print graphics – and don’t have to compromise on either the depth of colour or fine detail. Existing in the fascinating intersection between process, expression and utility, screen printing and vitreous enamel can hold huge appeal to designers and craftsmen, and produce results which last for decades to come.